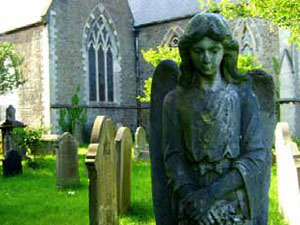 Rita Coupar was born in 1906. The people who knew her over the years, liked her. She was described as bright, cheerful, and dignified.

Rita married but never had children. Perhaps because of that, she was always very close to her nieces and nephews.

Her first husband died when Rita was sixty-eight years old. She remarried. Her second husband was named Earl.

Rita had money. Rita and Earl entered into a prenuptial agreement. They agreed to keep their property separate. Rita then signed a will, giving Earl $5,000, her furniture and personal effects, and the right to live in her condominium for five years following her death. Everything else in her estate was to go to her nieces and nephews.

Her estate ended up amounting to a million dollars or so.

Earl was described as being a man of great determination in all of his dealings. Rita became ill in 1997, and about that time Earl became determined that Rita would leave her million dollars to him or his children — not to her nieces and nephews.

Rita was hospitalized on June 25, 1997. Earl went to a lawyer fifteen days later to see if he could get out of the prenuptial agreement. When the answer to that appeared to be “no,” Earl decided that Rita needed a new will. He went to a lawyer – not Rita’s regular man – and started the ball rolling. Earl met with the lawyer repeatedly before meetings with Rita began. Rita never met with the lawyer alone.

First, they drew up papers to have Rita’s condo put into joint names. If Rita died first, which was looking likely, then Earl would own the condo outright. She signed.

Then Earl had a new will prepared for her. It left everything to him. If he died first, then the will left every thing to his children. There would be nothing for the nieces and nephews Rita was so fond of. She signed that too.

Earl then surprised everyone by dying first. Rita followed him to the grave shortly afterwards on December 23rd, 1998, two days short of her 93rd Christmas.

Earl’s kids came forward and claimed the million dollar estate. Rita’s nieces and nephews hired a lawyer – one who practiced nothing but estate litigation.

They fought through a nine day trial. The judge concluded that the will leaving everything to Earl’s children was invalid. There were two reasons.

First, the judge concluded that Earl placed Rita under undue influence and caused her to sign the new willagainst her wishes. You can persuade a person to leave their estate to you, you just can’t force them. It is a fine line.

Second, Rita lacked the necessary mental capacity to do a will. It was up to Earl’s children to satisfy the judge that Rita still had her marbles. They were up against two doctors. Both said she had lost the legal capacity to sign a valid will as soon as she first became ill. They were also up against Rita’s regular family lawyer – he had spoken to her and kept notes detailing alarming failures of memory at the time.

Luckily for the nieces and nephews, Earl had brought a poor lawyer to the bedside to draft the will. He did not ask the right questions, follow the right processes, or take the right notes. This left Earl’s children without any ammunition they might have used in defending the will. Legally, the onus was on them.

With the new will swept aside, the nieces and nephews inherited everything under the old will.

How much mental capacity does a person need before they can sign a valid will? They have to know what they own, who is in the family tree, and who among those family members might legitimately expect to inherit. They also have to understand what a will does. Finally, they have to be able to grasp all of those points simultaneously in their mind while deciding on the content of the will. Delusions are generally a bad sign.

Doing a bedside will for a person with diminishing mental capacity amounts to a specialty area of law. Attacking and undoing wills done by shoddy lawyers is another one.

All of the details in Rita’s story are taken from the published decision of the court. Names have been changed to protect the family from embarrassment.