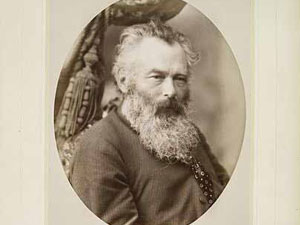 Walter McMann was born in 1908. He married at age 18 and had four children with his wife.

The couple led a perfectly normal married life until Walter deserted his wife without warning or explanation during a family vacation in 1944. The two never met again.

Walter moved in with his parents. He started to express strange ideas about his wife, and eventually found himself under psychiatric care for depression.

He told his doctors that his wife was “weakening his muscles with hypnotism,” and “using mesmerism against him,” and that she was able to “project electricity into his body.” He accused her of bizarre sexual excess. None of it was true.

It reached the point where the mere mention of her name would cause him to suffer abdominal pain and throw up.

Walter’s condition deteriorated further. He attempted suicide. He became violent. Finally, his parents became so concerned that they had him committed to a provincial psychiatric hospital in April 1946. Three psychiatrists diagnosed him as suffering from paranoid delusions.

He was released from hospital after two years but the delusions directed towards his wife persevered. He was told to keep away from her.

While Walter was unlucky at love, he had a magic touch with the stock market. At the same time as he started to develop and display his wacky ideas about his wife, he developed a singular success in picking stocks that increased in value. He never abandoned his off-kilter ideas relating to his wife. He also grew wealthy.

He hired a lawyer on January 25, 1949 to help him draw a will. Walter told the lawyer he wanted to leave his estranged wife the smallest possible inheritance permissible under the law. The lawyer told Walter that he was forced to give his wife one-third of the estate, and Walter did. He believed his children were in cahoots with his wife, and gave each of them a paltry cash inheritance under the will. Two thirds of his wealth was left to charity.

Six years after he signed his will, Walter died at the age of 46 years while living in Calgary.

The charity was happy at the prospect of inheriting Walter’s money. His family was less than happy to see the money go. They applied to court to have the will overturned on the grounds that Walter was mentally ill and lacked the capacity to plan and sign a will.

A person can suffer from delusions and still be able to write a valid will. Crazy ideas are only a problem if they amount, in legal parlance, to an “insane delusion.”

An insane delusion is an ongoing and mistaken belief that perverts a person’s normal sense of who should inherit from them. Thus, if you believe that your wife and children are trying to kill you, but leave them your entire estate – no problem. If you exclude them from inheriting, and are motivated to do so by the insane delusion, then the will can be set aside.

The court held that the content of Walter’s will was inextricably perverted by the delusions he suffered. The will was overturned and his wife and children inherited the whole of his estate. It amounted to more than a million dollars in today’s terms.

Although Walter’s last name has been changed in this article, his story is a real one. The details are from the published decision of the court that overturned the will.

Walter’s situation is rare. After limiting my practice exclusively to estate planning for several years, I have yet to be asked to write a will for a delusional client. The law is clear however. To make a valid will, you have to know the nature and extent of your assets, the persons in your life who might expect to receive them, and understand what a will is and does. If you can hold all of that rationally in mind, your estate plan will generally withstand challenge. That remains true even if you think you are a twelve foot purple chicken — just leave your estate to your chicks.

Gold Diggers Use Marriage To Revoke Will
Scroll to top