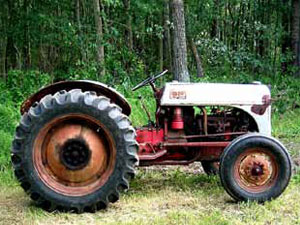 On June 8, 1948, Mr. George Harris was adjusting a disc apparatus on his farm when his tractor accidentally backed up, trapping him between the two pieces of equipment and opening a large gash on his leg. It was noon. His legs were pinned. He was bleeding heavily. He was alone.

He was found some nine hours later, and was rushed to the hospital where he died shortly after arrival. A penknife was found in his pocket.

A strange detail emerged when the equipment was being cleared away from the accident site. Someone noticed that something was scratched onto the fender of the tractor within reach of where the now dead Mr. Harris had been pinned: “In case I don’t get out of this mess, I leave all to the wife — Cecile George Harris.” Traces of matching paint were found on the knife in the dead man’s pocket. Mr. Harris had spent the last few hours of his life laboriously carving his last will and testament on to the surface of the fender as he grew weaker and weaker from loss of blood.

The fender was cut from the tractor and was actually put to probate at the local courthouse as George’s last will and testament. Today, it sits as a curio in a law school library in Saskatchewan.

How will you spend your last few hours? People procrastinate when it comes to having their wills drawn. George Harris procrastinated.

Perhaps it is because we all feel immortal. None of us thinks we will die today. Perhaps it is the reverse — having our wills done forces us to face the certainty of our future death head-on. Whatever the reason, people procrastinate.

Otto G. Richter died in 1960 after scrawling his will onto a hospital chart, a will that would ultimately dispose of an estate worth six million dollars.

Lorolina Nordquist was lost in the woods and found a shack where she wrote her last will and testament on the wall with chalk, fearing she would never find her way to safety. Age seventy, weak and unconscious, Lorolina and her will were found by rescuers. She recovered. No one was forced to cut away the wall of the shed and haul it up the stairs at the courthouse to be put to probate. It was touch and go.

Pause for a moment. Imagine spending your last hours in this world trying to improvise a will.

How can you break the cycle of procrastination? Pick up the phone. Call a lawyer. My firm limits its estate planning practice to clients with a net worth in excess of $2 million, but there are lots of other lawyers out there. We make referrals. By the end of the day, have an appointment scheduled for two or three weeks from now. No matter how you do it, just get some first step scheduled.

Adding this as an item to your “list of things to do” is a cop out. It has been on your list of things to do for years. What you need is a first step, and one that is scheduled with another person. That does two things. First, it creates a deadline, and second it creates an obligation to that person to show up and do something. Here is the key. As that first step occurs, book a second step — whatever that happens to be. You need to create a chain of steps that culminate in a signed will.

You may be busy working on your excuse as you read this. “I have to be prepared before I call a lawyer.” “I can’t make my will until I talk to the kids about the cottage.” “My wife and I can’t agree on who should take our underage children.”

Those kinds of thoughts will get you a date with a penknife. Take the first step.

You will find that the excuses melt away once you get your feet moving. The lawyer can help you prepare. The cottage discussion can take place mid-stream. The will can be concluded even if you can’t agree on who should take guardianship of your underage kids.

Next week’s column: A woman’s fading memory makes her will invalid.

Ability to Write Will Can Fade With Age
Scroll to top