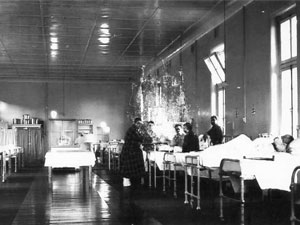 Jeff Nelson had a responsible position with the police department. He had a daughter, named Karen, before separating from his wife in 1980. Jeff never remarried. Karen was his only child.

The divorce that followed was not amicable. He had access rights, but visits were strained. After Karen turned 19 she saw little of her father over the decade that followed.

He may have been estranged from his daughter, but he was close to his sister. He saw his sister each Christmas, and on summer vacations. They visited regularly, and talked on the phone weekly. For all intents and purposes, his sister was his only family.

He took ill in July of 2004. His sister grew worried, and came to visit him, discovering her brother could not eat, or even hold a plate. She took him home, installed him in her guest room, and arranged to take him to the doctor.

A CAT scan revealed that Jeff had cancer in both his lungs and brain. He was given two weeks to live and admitted into hospital.

Jeff signed a power of attorney while he was in the hospital appointing his sister to handle his financial affairs– a detail that would later haunt her.

Jeff’s sister contacted Karen, his daughter, and brought her to the hospital. After years without any form of relationship, Jeff and Karen put aside their differences. Father and daughter were reconciled. Terminal illness will often do that.

Jeff enjoyed a brief period of remission. He left the hospital on September 28th 2004 and went back home. The doctors now gave him three to six months to live.

After he left the hospital, he discovered that his sister had withdrawn a total of $4,375.91 from his bank accounts. Rightfully or wrongfully, he concluded that his sister had been stealing from him. He was sick and may not have been thinking clearly. Unfortunately, terminal illness will also do that as well.

His sister denied any wrongdoing. Jeff was not convinced. He wanted the police to charge her with theft.

He missed his life insurance. It was still payable to his sister. To change that he would need to sign a beneficiary designation appointing his daughter as the beneficiary under the policy. That did not happen.

Jeff Nelson died on December 28, 2004 at the age of 51, three days after Christmas and four months after being told he had two weeks to live.

The life insurance company gave his sister a cheque for $90,386.03. His daughter sued and claimed that money as her father’s sole intended heir.

In a lot of ways, Jeff’s story is a sad one. It culminated with a sad little estate planning error. It is surprising how often life insurance goes to the wrong person. It falls through the cracks during estate planning.

This frequently happens after a divorce. The divorced person dies and only then is it discovered that they never thought to change the beneficiary under their life insurance. It goes to their ex-spouse. Sometimes that is OK. More often than not, however, it is absolutely not what the deceased would have intended — you can imagine them spinning in their grave.

Is the beneficiary designation under your life insurance policy up to date?

Jeff’s story is real, taken from the published decision of the court that heard the dispute. Names and some details have been changed to save the family embarrassment.

This article was current when it was written. No effort has been made to update it. It is not a replacement for

Joint Ownership Can Be Tricky
Scroll to top