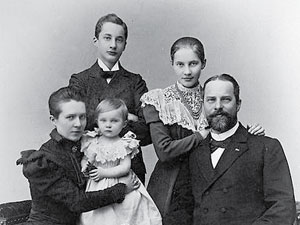 Seven years ago a trio of Toronto lawyers opened a new law firm. It was a bold experiment. They told the world that they would do nothing but estate litigation. They were true to their word — no house deals, no divorces, no commercial work, no other court cases of any kind. All they did was family fights over family wealth after family deaths.

How did it work out for them? It was wildfire. After seven years the firm had expanded from three lawyers to seventeen lawyers. Work poured in.

The growth was driven by inter-family warfare. Brothers fought brothers, sisters fought sisters, cousins fought cousins, and so on. These were families that would never sit down together for family dinner again — ever.

As the lawyers sat atop the litigation mountain they had created, one of them decided to coauthor a book.

The subject matter of the book was how to avoid a family war over money at death. The central lesson was that the vast majority of estate litigation could be avoided if families were simply more transparent when it came time to do estate planning.

Instead of keeping their estate plans secret, parents should share the contents with the children. They should meet, and talk, and explain. According to the authors of the book, the most powerful tool in avoiding a family fight was a family conference.

A family conference can take many forms. Predominantly, it is a meeting with the client and all of the client’s heirs and family. The estate planning lawyer is often present to referee. The contents of the client’s will and other estate plan documents are shared. Everyone gets to ask questions. The reason for everything is explained. The client answers their family’s questions. Some family members express objections. They receive explanations. Occasionally, the estate plan changes and is improved.

At the end of the day, the hope is that everyone buys in. Minimally, if buy in is not possible, at least the family is mad at the client who is doing the will, not at the other family members and heirs.

Is a family conference for everyone? The authors of the book believe that most if not all families would benefit from a family conference. That may be overstating it. In some situations it is just really, really hard to pick a fight. Everything is patently fair. Everyone is given an equal role. Everyone is given an equal share in the wealth. Equal is hard to fight over.

Other families really benefit from a family conference. Where one child benefits more than another. Where the wills are changed to shift the wealth from one set of beneficiaries to another. Where a family business is being given to the child who demonstrated the most aptitude in running it. Where a cottage is involved.

Disgruntled beneficiaries assume it was all the result of an evil plot. They hire a lawyer after the funeral is over. The lawyer hears, “Mom and Dad never would have given the cottage to Billy if they knew what they were doing – they must have been too old to understand.” Another chestnut, “they depended on Sally for everything in the last year, and must have been terrified she would bail on them – she must have convinced them to change the wills – how could they have said no?”

That sort of noise is silenced if a family conference had taken place when the estate plan was nailed down, giving the now deceased relative the chance to explain his or her reasons. Nothing is better than hearing it from the horse’s mouth. At the end of the day, the family might be mad at the horse, but no one is apt to blame each other.

Any estate planning lawyer who has presided over family conferences comes to swear by them.

Where, for example, a group of children are going to be given unequal shares in an estate, the possibility of a fight hangs like a shadow over the estate plan. Sitting down together, the family can reach a point where each of them understands exactly what is going to occur and why. The parents might tell a son that his share is smaller because he has done so well in life, and they are proud of him. His sister might object to the larger share she is to receive, and the son might assure her all is well and there will be no hard feelings. Both children can be given an idea of the projected value in the estate. The family conference replaces suspicion with understanding.

Sometimes, the best protection is transparency.

Next week’s column: Estate planning for families with US connections.