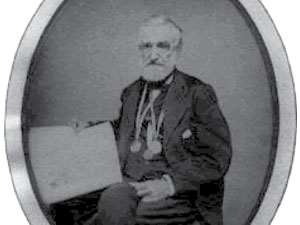 Mr. Pendock Barry lived in England in the mid 1800s. He was wealthy. He was also eccentric.

Those who knew Pendock described him as “childish in his amusements and occupations.” That was an understatement. He would have his servants prepare a coach, without horses, and climb aboard with a whip and pretend to be driving a team of horses. More strangely, and more upsetting to the help, he was fond of putting on boots and spurs, having a saddle strapped on to the back of one of his men, and then climbing on top of him and pretend to be riding. Truth is stranger than fiction.

Pendock managed to get married. He had one child, a son, and named him Barry, making his son “Mr. Barry Barry.” Father and son were estranged. No surprise.

As Pendock aged, it came time for him to make his last will and testament. His wife predeceased him. Barry Barry never came to see him. He signed a will that divided his estate among his lawyer, his butler, his housekeeper, and a medical attendant. The lawyer who prepared the will was the lawyer who inherited under it. That raised eyebrows when Pendock passed away.

Barry Barry must have been beside himself when he discovered he had been disinherited. He challenged the will in court, alleging that his father was soft in the head and that the lawyer took advantage of him.

The judge who heard the case must have had a field day. Witness after witness described the odd goings-on at the deceased’s country estate. After all was said and done, the judge decided that Pendock’s will was valid. Eccentricity is not insanity. If Barry Barry wanted to inherit, he should have visited more often.

While the lawyer’s conduct looked mercenary at first blush, the judge was convinced that the deceased truly understood what he was doing when he signed the will. The will was Pendock’s final eccentric act, but he really did want to give his wealth to his servants and lawyer.

Why should we care? The judge who heard the case developed a principle that is still used today to protect the elderly and infirm.

Lonely, old, and wealthy is a powerful recipe to attract predators. We all know an aunt, uncle, neighbor, or elderly friend who fits the bill. The predator worms into the life of the person who is the target, and convinces the target to make a new will. The will leaves a substantial bequest to the predator. It can be the whole of the estate or part of it. Regardless, the bequest to the predator is to the expense of the family or others who would otherwise hope or expect to inherit.

The predator often writes up the will for the target, or buys a will-kit. Sometimes, the predator arranges for a lawyer, drives the target to the lawyer’s office, and tries to sit through the meeting.

Predators come in different stripes and colours. It can even be the target’s child. It is not uncommon to see an effort by a son or daughter to convince an elderly parent to exclude siblings, or make an “extra” bequest for the predator.

How does the court stop them? Where presented with a bequest that looks predatory, the court demands that the predator give evidence removing all suspicion surrounding the preparation of the will. Proof removing that suspicion is required before the bequest to the alleged predator will be allowed to stand. That is the principle from the Barry case.

It does not matter if the will-maker had his or her marbles. This has nothing to do with mental capacity. The real issue is whether the will-maker really and truly understood what they were doing when they signed the will conferring the suspicious bequest on the person who caused the will to come into existence.

In the right case, those demands can amount to an insurmountable legal hurdle for the predator. Unfortunately, families and other thwarted heirs often take this kind of thing sitting down. The will is not challenged and the predator inherits.