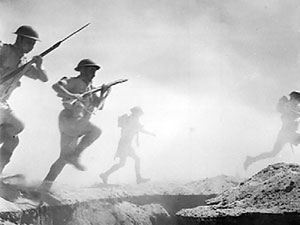 Mr. R. Dodds lived in England while World War Two was in full swing. He was divorced from his wife, and had four children.

He lived in trying times. The Battle of Britain had been waged and won. England had been heavily bombed. The invasion of France seemed an impossible task. On July 26th, 1942, the British Minister of Food had announced a tightened ration for chocolates and sweets (a half pound per person each month).

Three days after the chocolate ration was announced, and unbeknownst to Mr. Dodds, a personal war was declared against him on July 29th, 1942. The aggressor was a Mr. Piper, who launched his offensive in a lawyer’s office by signing a will. The will would, at Mr. Piper’s death, set aside two large funds of money, one for the wife Mr. Dodds had divorced and the other for the four children Mr. Dodds had sired.

The will was signed in secret, but hostilities broke open six months later when Mr. Piper died on January 30, 1943 and the will was read over and put to probate.

First, there was the fund for Mr. Dodds’ ex-wife. The fund was to be invested and structured so she was to receive the income, but the income would end if she moved back in with Mr. Dodds.

Then there was the fund for Mr. Dodds’ children. The children would get the money at age thirty but only if they did not live with their father, Mr. Dodds, prior to attaining that age.

It was a curious kind of war. The clauses, if valid, prohibited cohabitation between Mr. Dobbs and his ex-wife and children, but not contact. The condition governing the children, for example, provided that if they set foot, day or night, in any premises that their father owned or rented, they lost the inheritance from Mr. Piper. They could see their father in the street, attend the theatre together, go out for a meal, but could not cross the threshold of his home without fear of losing the inheritance. Mr. Piper’s intention with his will appears to have been to force Mr. Dobbs to sit alone, in an empty house.

The will was so awkward that everyone took time off from the real war to go to court and have the offensive provisions of the will declared void. The court rewrote the will by striking out the conditions preventing co-habitation. The ex-wife still got the income. The kids still got the inheritance at age thirty.

The story of Mr. Dodds and Mr. Piper is a true one. The details are taken from the published decision of the judge who heard the case.

The law will not allow a clause in a will that disinherits family members if they have contact with each other. A clause having that effect can be struck down by a judge as being against public policy. In lawyer talk, the clause is malum prohibitum (lawyers love Latin).

Other types of clauses are prohibited. Clauses that compel beneficiaries to break the law are not allowed. The law gives judges a general discretion to strike down clauses in wills if the operation of the clause fosters behavior that is harmful to the community.

Clauses that encourage good behavior are allowed. Thus, a provision can be built into a will that provides a generous income for beneficiaries who are attending university. Clauses can be constructed requiring beneficiaries to exercise, or volunteer with charity, or stop smoking and remain nicotine free.

Some clauses are harder to characterize. A rich lawyer died in Ontario at the beginning of the last century setting up a contest and leaving a huge fortune to the winner. What was the contest? The winner was to be the woman, whoever she might be, who could give birth to the most babies in a ten year period following hisdeath while residing in the Toronto. The clause was attacked by family members hoping to strike it down as against public policy. It encouraged people to have babies – thought in most circles to be a good thing. It encouraged people to have a lot of babies — too many babies can be a bad thing. What did the court decide? The clause stood. The contest resulted in a tie, and the fortune was split among four mothers who had each given birth to nine babies during the ten year period.

Getting Dad to Redo His Will
Scroll to top