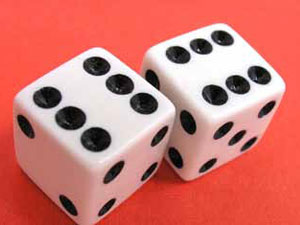 Lawyers draft wills that are all business. The fun starts when people take up a pen to draft their own will, without the assistance of a lawyer.

Henry Durrell left a will providing that one of his three nephews would inherit his mansion and extensive estate in Bermuda. Which nephew? The will directed that the three men decide the question by throwing dice. They met at their late uncle’s mansion in Bermudaon March 15, 1921 to decide the question, as directed, over a pair of dice. Richard Durrell won.

From the will of Rufus Hatch who died in 1841, a different sentiment: “I earnestly desire that my children shall not gamble in any way for money, as their father has had experience sufficient for all posterity.”

Some wills can be downright nasty. William Dunlop signed a will on August 31, 1842 providing: “I leave Parson Chavasse … the snuff box I got from the Sarnia Militia, as a small token of my gratitude for the service he has done to the family in taking a sister that no man of taste would have taken.”

Not to be outdone, Garvey B. White died in 1908 with a will providing: “…that before anything else is done fifty cents be paid to my son-in-law to enable him to buy for himself a good stout rope with which to hang himself, and thus rid mankind of one of the most infamous scoundrels that ever roamed this broad land or dwelt outside of a penitentiary.”

The famous author Heinrich Heine is reputed to have left a will giving his wife all of his assets but on the condition that she was forced to remarry before she could inherit. His explanation was written into the will: “…then there will be at least one man to regret my death.” A confirmed bachelor died in 1610 leaving a large cash bequest to a woman who had refused to marry him when he was a young man. His will expressed his thanks to her for “a happy bachelor life of independence and freedom.”

Other wills are quirky. The will of Herman Oberweiss was submitted for probate in 1934, short on spelling and grammar but long on character. A sample (preserving the spelling mistakes from the original): “Tell mama that six hundret dollars she has been looking for ten years is berried from the bakhouse behind about ten feet down. She better let little Fredrick do the digging and count it when he comes up.”

Later in the same will: “I want it that mine brother Adolph be my executor and I want it that the judge should please make Adolph plenty bond put up and watch him like hell. Adolph is a good bisness man but only a dumpph would trust him with a busted pfennig.”

From the will of Wayne Morris, actor, who died in 1959: “One hundred dollars shall be expended at the discretion of my closest surviving relatives for the purpose of buying booze and canapés for my friends. On second thought make it three hundred dollars because I don’t want my friends to go away sober or serious.”

Jack Kelly, a successful businessman and the father of actress Grace Kelly, wrote his own will in 1960. It gleams with common sense and kindness: “In this document I can only give you things, but if I had the choice to giveyou worldly goods or character, I would give you character. The reason I say that, is with character you will get worldly goods because character is loyalty, honesty, ability, sportsmanship and, I hope, a sense of humour.”

The credit for collecting these examples goes to Robert S. Menchin, who compiled them in a 1963 book, now long out of print, entitled “The Last Caprice.” It is one of many books and websites dedicated to weird wills and strange bequests.

There is nothing wrong with stirring a little character into your last wishes. Avoid being nasty. Avoid being mischievous. Do right by your heirs. Remember, many of these wills entered the public record only because of the court battles that ensued.

Finally, if you want to keep things calm, use a lawyer to help you plan and draft your will. With a quirky enough plan in mind, the lawyer may mount some resistance. Sometimes that can be a good thing.

Next week’s column: Ronald Regan gives us a lesson in planning for incapacity.

An Estate Planning Lesson From Ronald Reagan
Scroll to top