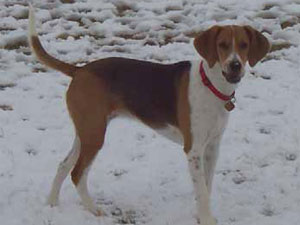 Thelma L. Russell signed her last will and testament in California on March 18, 1957. Handwritten on a filing card, it was short and to the point: “I leave everythingI own, Real and Personal, to Chester H. Quinn & RoxyRussell — Thelma L. Russell.”

Witnesses testified that Roxy was a pet Airedale Terrier owned by Thelma at the time she made her will. What is more, the dog died shortly after the will was signed.

Arthur Turner, an owner of a local pet cemetery, told the court that Roxy had been buried on June 9, 1958. Other testimony established that Thelma replaced Roxy with another dog. While it answered to the name Roxy, the new dog was in fact registered with the American Kennel Club as “Russell’s Royal Kick Roxy.” The Roxy sheowned when she died was not the Roxy she intended as a beneficiary when she wrote her will.

How much money was in the estate? More than enough to fight over.

Chester Quinn was the person named as the second beneficiary, alongside Roxy, to receive the other half of the estate. He had been Thelma’s tenant for twenty-five years in a rental unit she owned. Chester claimed the dog’s share. Thelma’s nearest family member, a niece, claimed it as well. No claim was advanced on behalf of Roxy, but the litigants fought like dogs through two levels of the California court system nonetheless. The niece ultimately won.

The canine tale of Roxy Russell illustrates the danger of do-it-yourself estate planning. A dog cannot inherit. A lawyer on his or her first day on the job would have raised the alarm. The danger of writing your own will is the danger that Thelma R. Russell encountered. It is easy to get it wrong.

The tale also raises the topic of special arrangements for the benefit of pets. People assume that they willsurvive their pet. Yet hundreds of thousands of pets are orphaned every year. A cat or dog often occupies a special spot in the heart of their master, but rarely a special spot in the master’s estate plan. A dog, or cat, or parrot, can be set up for life. It just has to be done right.

Trust laws were developed by judges in the early 1800’s to allow special types of trusts for the care of pets. A person, called a trustee, is given a sum of money along with the written legal instructions to hold the money in trust and use it for the ongoing care of the pet. Canadian tax laws, however, have complicated the use of trusts to the point where a trust for the care of a pet is has become an option reserved for the rich and eccentric.

More recently, organizations across Canada like the humane societies in Manitoba and British Columbia have implemented special programs intended to assure a good home for people’s pets after they die. The master makes a gift to the humane society in their will, and the organization makes a commitment to finding a new home for the pet after the master dies, and depending on the program may even pay future veterinary bills. No formal trust is required, but the minimum gift to gain entry to the program can be large. Only a portion ofit will be tax deductible. The Calgary Humane Society has no formal program in place, but may be in a position to make arrangements on a donor by donor basis if contacted in advance of death.

Another option is to make a conditional gift in a person’s will. Thelma could have left $10,000 to a friend onthe condition that the friend take her dog, whichever Roxy she happened to own at her death, and promised to give it a good home. This can work well. It is less complicated than a formal trust, but is an honour system. Once the friend takes the pet (and the cash) there is no one to check up on the situation.

At the most basic level, pet owners should consider having a simple conversation with a friend or relative who is willing to commit to taking the pet if the master dies. Nothing enters the owner’s will. Often “nothing” isbetter than a misguided attempt, like Thelma’s, to do-it-yourself.

Next week’s column: An Ontario man changes the landscape of Canadian charitable giving.