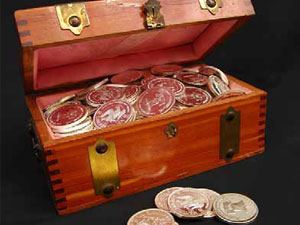 Samuel Smith’s wife died in June of 2000, leaving him lonely and depressed.

He hired a house keeper, Francine. She did some part-time cooking and cleaning for him. She was rarely in sight when his children visited, but everyone knew she had been hired and it appeared to be a good arrangement. He could afford it.

On May 10, 2001 Samuel was diagnosed with lung cancer. It was inoperable and quick moving. Francine became his full-time housekeeper and moved into a second bedroom in his home.

Francine was recently divorced and needed money. Samuel had money. She decided that she loved him.

His health deteriorated quickly. Before long Francine was changing his diapers and taking care of all of his other physical needs. His mental powers started to suffer. Francine convinced him to marry her. She also convinced him to keep the marriage secret from his five children until after the ceremony.

She made plans for a rush wedding. Samuel had just enough wit left to try to protect himself and the children. It was a feeble attempt, and Francine thwarted it. The pair went to a lawyer and asked him to draw up a prenuptial agreement. It would give Francine $30,000 but no share in his estate after he died. Samuel gave her the $30,000 immediately. She kept the $30,000 but fired the lawyer the next day behind Samuel’s back. No prenuptial agreement was prepared.

Physically, the groom was no catch. Medical records place him at the local emergency ward two days prior to the big day, coughing up blood, suffering from pneumonia, and having difficulty breathing. The cancer was raging. He also had Parkinson’s disease and diabetes.

The marriage proceeded as Francine had planned. Samuel was 70 years old, incontinent, confused, in pain, heavily medicated, and completely reliant on Francine. She was 47, physically and mentally strong, and lived with him twenty four hours a day. No family or guests were in attendance.

Samuel succumbed to cancer and died on October 13, 2001, about a month and a half after the wedding.

Over the last four days of Samuel’s life Francine started going to the bank machine with his bank card. She withdrew several hundred dollars each trip. She made an average of 7 or 8 trips a day. She continued when his body was in the morgue. She made a total of 39 trips over six days and withdrew a total of $26,500. She was industrious. It would have left her little time to hold her husband’s hand during his final hours.

Francine demanded her share in the estate as Samuel’s widow. Marriage has the effect of automatically revoking a person’s last will and testament. Without a will, the laws that applied to Samuel’s estate gave Francine half of his estate. On top of that she demanded support for life, asking for between $2,000 per month from the balance of the estate for the rest of her days.

The kids fought back and everyone went to court.

The judge concluded that Francine was nothing more than a housekeeper who wanted Samuel’s money. The court annulled the marriage, and the kids inherited everything. Francine was ordered to pay everyone’s legal fees.

Samuel’s story is true. The details are taken from the published decision of the court, changing only the names.

In legal circles, Francine’s efforts to cash in on Samuel’s infirmity is known as “predatory marriage.”

Here is how it works. A gold digger, like Francine, targets a person like Samuel, rich, old, infirm and having lost half of his marbles. That last bit is the key. A person with half of his marbles can still legally marry, but cannot enter into a new will. The marriage revokes the old will. That leaves the gold digger with claims to the estate under laws designed to protect innocent spouses. So long as the marriage sticks, it is difficult or impossible to undo the situation once the gold digger has sunk his or her hooks into the target. Marriages are hard to annul.

Predatory marriage exploits a gap in Canadian laws. While it works fine in principle, the body of published court decisions in Canada are full of failed efforts at predatory marriage. When the facts become known, Judges bend over backwards to annul such marriages or to find some other legal grounds to ensure that justice is done.

Next week’s column: Life insurance can be loose end.